Swedish-Iranian Ayelle has been songwriting ever since she learned how to write.
Known for her bittersweet, emotive vocals and compelling, vulnerable lyrics, she draws inspiration from own life experiences, exploring a range of topics such as self-worth, power dynamics within relationships and challenging the status quo. 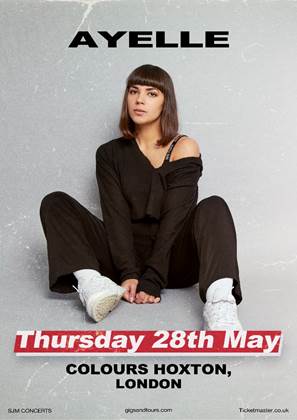 Growing up in Sweden and Spain, she continued on to pursue music in London, where she garnered support from the likes of Billboard, Pitchfork, Complex, BBC 1Xtra, Majestic Casual, and Highsnobiety.
Ayelle has since continued on to receive the PRS Momentum Fund in early 2019 whilst releasing a single every month, performed at SXSW, signed publishing with UMPG US and relocated to New York City.

She’s set for a special, one-off show at Colours Hoxton in London, on Thursday 28th May.
Tickets are on sale now, available from http://gigst.rs/AyellePR.