The indie trio with a tropical sound have recently finished their European tour, their biggest to date. I spoke to frontman Rob about their debut album and their upcoming tour.

Q: How are you?
Rob (Cassia): We’re all doing good over here! 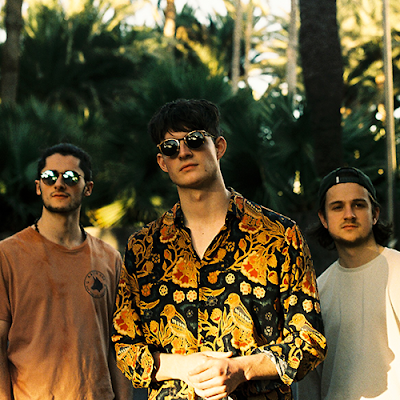 Q: Can you tell me a bit about yourselves and how you formed Cassia?
Rob (Cassia): Well me and Lou went to school together. We were both heavily into music throughout but were involved in separate projects. Jake went to a school down the road. I remember him telling me during the early days of Cassia that he was proper obsessed with making it as a session drummer. I think he left sixth form early on for his first gig. Shortly after finishing A levels I set up a project studio in Macclesfield where Lou happened to work at the time. We subsequently started jamming together eventually organising a couple of small shows in and around Macc. The gigs were just a bit of a laugh. we did what we could to make the few songs we had sound decent enough. Lou got kinda bored though of playing the kick drum as well as the bass so we thought it was time to scout around for a drummer. We bumped into Jake in Weatherspoons shortly afterwards and to our surprise he was up for joining!
Q: How does it feel to have your debut album out?
Rob (Cassia): It feels ace, we put everything into making that thing!
Q: What was it like creating the album? What was the process behind it?
Rob (Cassia): It was pretty intense because we were touring heavily whilst recording. A lot of the songs were in embryonic form for quite a while, and almost half the album wasn’t written when we went into the final weeks of studio time! But we kept on with our goal we had in mind from the start. We wanted the album to sound relatable but different.
Q: What can we expect from the album?
Rob (Cassia): An uplifting blend of African, calypso and indie rock music that contrasts against sad lyrics.
Q: What influences your music?
Rob (Cassia): It’s always changing. For the first album it was mostly personal experience. But I guess the thing that’s influenced the music the most is the idea that you can shroud sad experiences with positive sound.
Q: Which bands/artists are you currently listening to?
Rob (Cassia): Summer salt. Whitney. Unknown mortal orchestra.
Q: What's the craziest thing that's happened to you as a band?
Rob (Cassia): Playing the NME stage at Reading!Q: What's next for you?
Rob (Cassia): The rest of this huge tour! Q: Where can we see you live?

Rob (Cassia): We’re currently finishing our EU leg of the tour in Austria and we tour the U.K. and Ireland starting 15th October!