As the first in a series of 'Playdates' that Childcare are hosting, I may or may not have found myself at their gig in a disused tunnel in London recently. It just happened to be one of the coolest, definitely non-illegal, gigs I have ever been to!

Adhering to the strict ‘blue’ dress code, I had on a navy striped jumpsuit, blue eyeliner, blue nail varnish and bright blue heels-there was no way I was going to be denied access to this gig. I had been looking forward to it for too long!
Technically none of us had been granted access to the abandoned area situated next to the public toilet (although you didn't hear it from me; I ain't no snitch).

So despite being kinda illegal (allegedly) and really creepy once the lights went out, the Childcare gig was incredibly fun. They're an amazing live band and, as always, they absolutely smashed it. Rich, especially, gets a mention, because I still can't believe how he played the guitar whilst in the crowd..on his back! But, then again, I can..because that's just how insanely talented this band are.  Before the gig started, there was the challenge of finding the venue. Those that had RSVP’d to the gig announcement had been sent instructions via email for how to get there and what to look for. We had been told to enter at the same time (8.30pm) and had strict instructions to wait for a girl with a rainbow balloon to lead the way.

Once in the tunnel, Rich took on the role of support act in what felt like, and may have actually have been, more of an art installation (if that's the right term for it). For a good few minutes he played his guitar and whispered 'Childcare', amongst other things, into the microphone at varying volumes. I won't pretend that this didn't freak me out a little but it was worth it.

Then, they filmed parts of their next music video, ‘Big Man’, and there is a slight chance that you might see yours truly making a brief appearance in a Childcare music video coming soon (although I was hiding behind the speaker, so if I’m lucky, you won’t!).

The rest of the gang came out after and lights were switched off, which was quite eery. They started their set with ‘Film Club’ and introduced their new song ‘Champagne Brain’ later. It was the first time I have heard it performed live. Ed, in his usual modest way told us, “this is our brand new song and it’s gonna be f*cking good.” I have to say, he had a point!

They also performed ‘Bamboo’, which is the one where bass player, Emma, switches roles with frontman, Ed Cares, to take over lead vocals. They ended the set with ‘Kiss?’ which is one of my favourites, and also one I haven't heard in a while. They also played 'Magazines', 'Jumble' and 'Omega Grey' too.

When they had finished, the playdate attendees were visibly upset, but we were told we had to get home in time for bed. Chants of "one more song" followed, forcing the band to come back and admit they had “forgotten” about the possibility of an encore. Of course, someone requested ‘Kimberley’ but we were quickly told by Rich that they “didn’t know that one.” It was a choice between ‘Hanging on the Telephone’ and ‘Dust’- ‘Dust’ won.


Being the fangirl that I am, I had a little gift to give the band. I had brought them sweets and pens that matched the colour theme. The pens reminded me of some of the props the band use too, but I was really nervous about giving them to the guys. As my sister had told me, “you don’t give marshmellows to rockstars” but I figured that everybody likes sweets, right??

Luckily, they really liked the gifts and the pens even made it onto the official Childcare Instagram stories which, you can imagine, made my entire day.

Afterwards, I had a chance to pose with the rainbow balloon and then I went home incredibly happy with how the night had gone. My friends and I couldn’t stop talking about how great it had been. 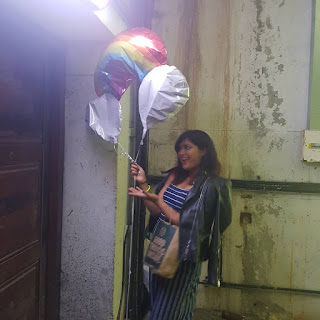 I can’t help but wonder when the next playdate will be and what they have in store for us.
I just hope I’ll be invited!

Have you seen Childcare perform? Or listened to their music?

Who are your favourite bands to see live?

Thank you for reading!