So, as you know, I recently saw Bastille play live in Paris and when I found out they were playing the NME Awards at the infamous Brixton Academy I just had to be there!

The NME Awards were Wednesday 15th February. Unfortunately, they only performed Good Grief. I would have liked to hear more tracks of theirs but their performance was fantastic. And, best of all, I got to meet them after!!! Kyle had left early but when Dan came out I got a hug (eek!) and picture with him. Will gave me a high five and Woody was so lovely to talk to. And congratulations to them because they won Best Album. 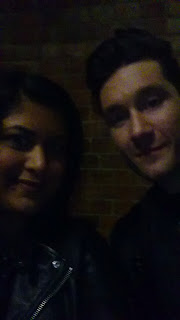 The NME awards were sponsored by VO5, among other companies so we were given goodie bags after the show containing a magazine, Pilot pens, a hair wax and primer spray. The wax is for lifting and volumising and works really well. I wasn’t sure if the concept of a primer spray was necessary but when I used it I found it was good because it also has heat defence properties.

I stayed the night in London, so the next day had shopping on the agenda. I have to admit, I was very naughty. I just want to quickly add that I’m not being boastful by talking about my little spendy purchases. I just thought it would be interesting to share what I picked up.

I came across a shop called Hema which did a range of products, not just beauty. I picked up a few masks which were good value for money.

First on my list on Oxford Street was Topshop, of course. I couldn’t resist their Pokemon face mask and a collagen lip mask. The Pokemon mask was by Tony Moly and it was a brightening grapefruit one. My granny even commented that my skin looked better after I used it so I was happy with that! #GrannyApproved. The lip mask was definitely hydrating. 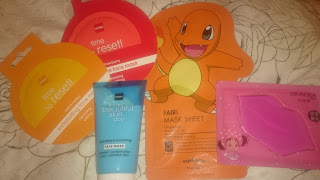 Two things I’m a sucker for..nude lipstick and lace tops. In H & M, I found both. I have their gossamer lip stain in a deep pink colour and I really like it so I picked up a nude version called Storyteller. I also found a grey top with lace detailing at the bottom which I love because it’s casual but really nice at the same time. And it was only £9.99.

I did a little mission to Harvey Nichols next. It took me ages to walk to Knightsbridge from Oxford Circus and I was on the hunt for the Marc Jacobs liquid lipsticks. It turned out that Harvey Nichols didn’t do them and they directed me to Harrods. I told myself I’d only get one but I took home Slow Burn and Hot Cocoa. I’ve been wanting to get my hand on them for ages and I’m planning to do a separate blog post on them. 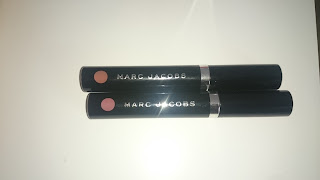 Then I headed into Space NK where I had my makeup done and the MUA was talking about how matte lipstick was so 2016 and it was all about lipglosses for spring. I purchased a By Terry lipgloss in a gorgeous colour. It looks scary when you first apply it but when you rub your lips together the colour blends into a really pretty shade. I’ve never bought anything from ByTerry before so I’m really excited about this. It contains vitamins and hyaluronic acid to give a plumping effect.

I popped back into Harvery Nichols for a blowdry at Hershesons as I had some time to kill (excuses, excuses). I chose to get loose curls and felt really glamorous when they were done. It was a nice treat.

Lastly, it was into Primark. I like the Primark in London because they have things you don’t find in the normal stores. I got two dresses and some Pikachu socks. They were too cute to pass up. I got a pair for my sis too.

What’s your favourite thing to do in London?