I know, I know – another travel blog post? Well, this time I was fortunate enough to visit Paris for 3 days and, my God, I’m so glad I did. My younger sister kindly accompanied me.

We flew from London Luton Airport to Charles De Gaulle in France. The flight was at 7.10am which meant we had to be up at a ridiculous hour in order to make it. We flew via Easyjet by the way, which I found fine.

Our hotel was in the 9th Arrondisement and fairly central. It took around half an hour to reach it by train and metro. Traveller’s tip for you – when purchasing the 3 day travel card (which allows for unlimited transport access) opt for the cheaper 27 Euro one designed for residents,  as it’s exactly the same as the 50-something Euro one meant for tourists. The nice lady working at the train station helped us with that.

The first thing that struck me about Paris was how pretty everything was. And clean. It was absolutely gorgeous.

On the first day it was quite funny because we were super tired and just ended up grabbing a McDonalds and going to bed early.

The second day was a bit more eventful as we caught the metro to see the Eiffel Tower. We decided to catch the elevator right to the top and the view was stunning. 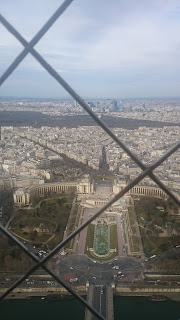 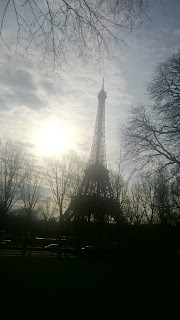 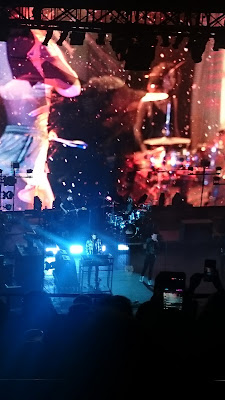 I then had something really exciting planned for the evening – Bastille in concert! They were the main reason I had gone to Paris as they are on a worldwide tour at the moment and were playing at the Zenith. The opening act Frenship were a really good American band. They won me over with their funky dance moves! And Rationale’s lead singer had an amazing voice. So talented. But what was really amazing were Bastille. It was so much fun and I’m actually really sad that it’s over. I wish I could follow them to Barcelona to see them again but that’s not going to happen. Sad times.
We actually hung around for 3 hours afterwards to try and meet the band (let’s be honest-Dan :)) but I think they got straight in their cars and zoomed off, because they had a long journey ahead of them to their next destination. If anyone is thinking of going to see them live, I would definitely recommend it. You’d be in for a treat!

The third day was mostly travelling as, alas, we had to leave the beautiful city of Paris and come back home.

We did have a chance to visit an indoor market in the morning and part of that market included the Victoria Station restaurant. This was a restaurant designed to look like an old-fashioned luxury train and it was lovely. Very reasonably priced too.

My only regret though, being a beauty enthusiast, was not getting a chance to visit Sephora. I had been perusing their website and had quite a long list of things I wanted to check out, such as the new Marc Jacobs liquid lipsticks and the Elizabeth and James Nirvana perfume. Perhaps I’ll have to do some online haulage… or maybe I’ll get a chance to go to Paris again ;) I really hope so!

Have you been to Paris, or would you like to? Tell me in the comments section. I’d love to hear.

Thank you for reading!